When we visited Edinburgh in the month of May this year I could feel a strange quality of magnetism in the place which attracted me. However, naïve as I was I could not really put my finger on what created that magnetism. Now as I sit down to write this blog and sift through the pictures we had taken that I realise what a fool I had been. How could I miss such an obvious thing? 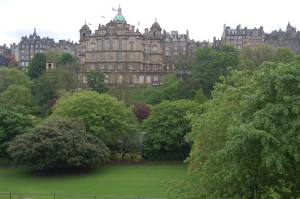 Edinburgh, the city of Scots, the second most important financial district after London displays a perfect example of history peacefully and seamlessly juxtaposed with modernity. The City comfortably allows both to happily co-exist without one being strangled to help the other rise to prominence. Moreover, I do not think this is only for the purpose of tourism. The Scots, it seems, has happily adopted this as their way of life. I believe that is also what gives the place its unique character.

As if to symbolise this juxtaposition, the Princess Street Gardens acts as the significant green stretch dividing the new and the old. To the north of this verdant swathe lies the New Town built in the 1700’s wrapped in shimmering glass buildings and shopping plazas beginning with the Princess Street; to the south we could see the old era beckoning us from the peaks of the Edinburgh castle rising up to meet the clouds enshrining within its chambers the rich history of Scotland. The Castle rock, on which it is perched, overlooks the long stretch of the Old town that also holds the Holyrood Palace, another emblem of the bygone era happily reinstated for newer days.

As we walked up the cobbled paths of the Royal Mile to reach the gates of the Edinburgh Castle, we were mesmerised by the cacophony of colours and diversity which were peculiarly in harmony with each other and the surrounding ambience. Shops selling trinkets and souvenirs were lined up on both sides of the road filling the gaps between life-size statues of personalities like A.V.Hume and Adam Smith which stood tall without the liberal smattering of bird excreta on their hallowed self. A young group of musicians enthralled everyone with amazing East European music. While the popular English magician whom we saw probably on every street in London continued to bewitch the Scottish crowd with his tricks; a motley list of events but one which feels just right and befitting the place we are in. As we stopped before a church to watch a Scottish marriage in progress, the groom stepped out of a Rolls Royce dressed in Kilts, the traditional Scottish attire, as suavely as he would in an Armani or a Tuxedo. Isn’t that a wonderful way to nurture the old wrapped in the mantle of the new? 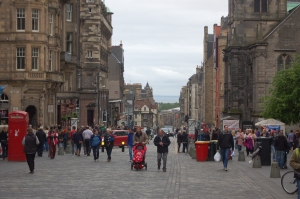 On searching for places to eat, we were pleasantly surprised to find the city adequately equipped with a host of varied cuisines. It has eateries serving exotic platters of authentic Turkish, Lebanese and Chinese cuisines. For the less adventurous tourists it also has its fair share of KFC’s and Mac Donald outlets. When we moved up the highlands, we dug into platters of wholesome Scottish meals comprising Haggis and black pudding which, in the old English way of saying it, were truly scrumptious!

We never had plans to stay in the city for long. After all how could we know, given our experience of cities back home, that it could offer so much. However, now as we look back we feel miserable. Edinburgh has a lot more to offer than probably what people expect from it. Admire the portals of erudite institutions like the Edinburgh University and the Royal College of Surgeons, appreciate the fancy designs of the Scottish Parliament, and go crazy with the fascinating optical illusions at the Camera Obscura. When you are done with all this, take some time out to walk through the labyrinths of the Edinburgh lanes to let the character of the place soak into your souls. It is then and only then you will realise the enigma that is Edinburgh.