It was in the mellow month of March when we decided to raid the jungles of Rajaji in the hopes of exploring its varied fauna. We, however, ended up getting more than what we had bargained. We got to experience a picturesque rainbow sprayed across this rich jungle land and of course the proverbial pot of Gold at its end.

Cock-a-doodle
let me show off my colours to you

We perked up our ears at the faint rustle in the bushes nearby. Out popped a bright red crown, set above an orange neck looking at us suspiciously from behind scowling ochre coloured eyes. Finally as the rich chocolate brown plumes fluttered out, our driver muttered from behind tobacco stained teeth “Jungli Titar” (Jungle fowl). “Bahut milenge” (you will get to see a lot of these) he said casually as we kept our fingers pressed on the camera shutters in childlike excitement. He must be secretly laughing at us but we ignored him. It was our first wildlife, albeit the wild version of our domesticated hen, it raised our spirits in anticipation of greater things in store for us. The bird proudly strutted before us craning its neck to have a good look before deciding that we were not worthy to be privileged with its august presence anymore and fluttered off into the bushes.

We left the patch of greenery and moved on to a barren stretch of land glowing in its raw beauty of being nothing but a bare expanse of brown earth coloured by the stubble of fresh grass growing in green patches here and there. The early morning sun was busy drenching the hills on both sides of the road with a rich yellow glow. As the road snaked its way towards our destination – the Rajaji National park, it painted a bright picture set off against the brilliantly blue sky. It was only later we realised that we were driving through the bed of a river. Through the numerous jolts, jerks and jumps on the back seat of the rundown jeep that was unfortunately bestowed on us and threatened to dislocate our hip bones any moment, we caught phrases from the driver’s conversation. He went on, unaware of our obvious discomfort and happily informed us that the very road we were driving on would be completely submerged in the Monsoons. Thankfully that was quite far away and we arrived safe, and dry but severely aching at the portals of the national park.

Grey! You do have a Name

Just as we entered the gates, our driver slowed down suddenly and pointed towards the thickets on our right. Tensed and excited we stood up.

We could hardly imagine our luck. Rajaji is one of the largest elephant corridors and is famous for its healthy population of pachyderms. Dying to get a view of the animals in their natural habitat we practically stood up on the seat of the jeep. We were told it was a full herd and were asked to keep absolutely silent as there may be calves and elephants can get extremely aggressive to ensure the security of their calves. We did hear the scrunch as they gobbled the vegetation, could make out their shapes as their bodies brushed against the trees, and also heard the satisfied grunt of having devoured a healthy breakfast. Unfortunately, I failed to grasp a full view of the big beasts. Obviously, everybody around me did, or at least they professed they did. However, my poor self failed to grasp even a tiny glimpse of their puny tails. 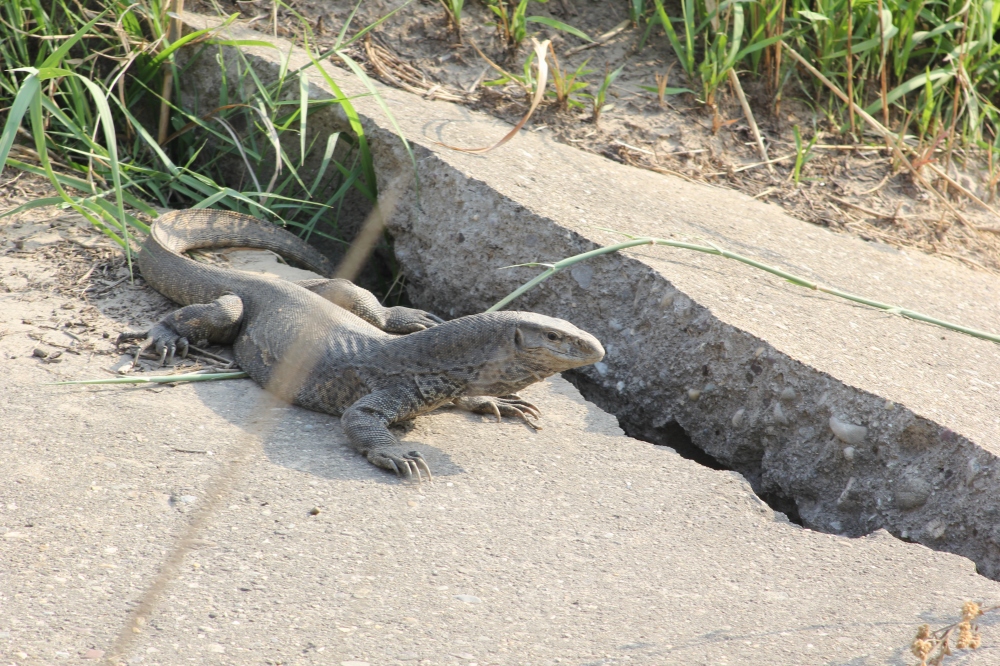 We moved on further into the interiors when suddenly one of us noticed a movement in the grey stone on our left. It was finally when the dust, raked up by the jeeps running before us, settled down when we realised what had caught our attention. It was a huge monitor lizard lazing in the afternoon sun perfectly camouflaged in the surrounding slabs of grey stone. Its black beady eyes held our gaze with a directness that was striking. Its head raised and feet spread out for grip, it did present a pretty bold picture in grey. Lizards, no matter in what form, have never been my favourites. However, in the canvas created by the willowy wilderness that surrounded us, the monitor lizard endowed the colour grey with a new character. Having hitherto ignored the colour as dull and boring, I began to regard it with a renewed interest. It appeared to have assumed a new uniqueness in my eyes. Its bland shade had a hue of its own that I now found difficult to ignore.

Blue, Blue or So True! 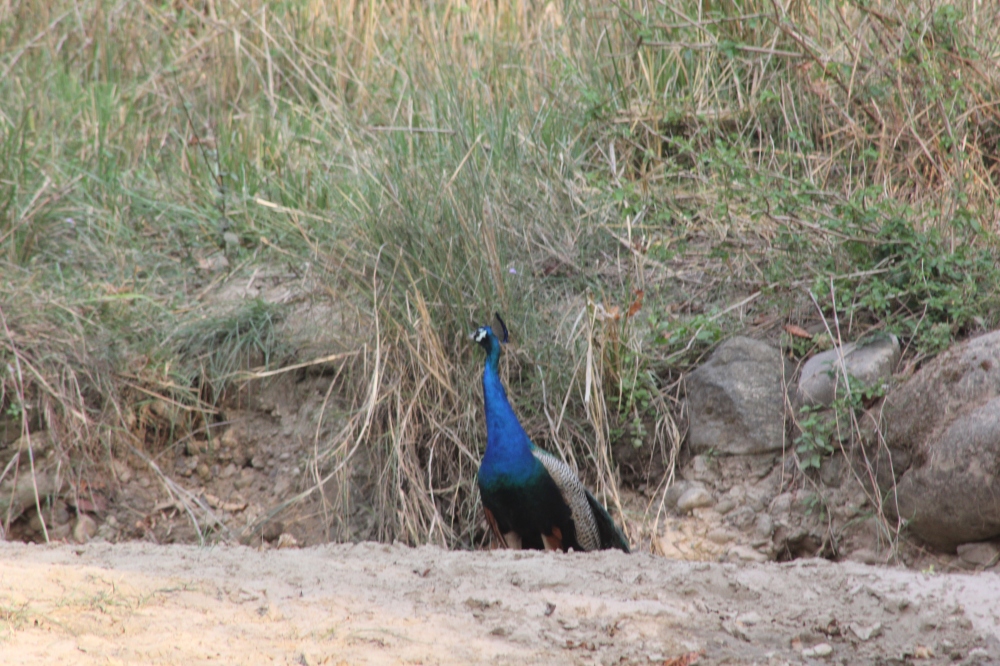 Further on, it was the speck of blue that caused us to stop. Two Indian roller birds all spruced up and happy in the company of each other strolled over for a late morning walk. In the backdrop of the yellow sandy road, the spot of blue was a riveting vision. We suddenly recalled that we had been regaled by this bright colour almost throughout our journey to the park and even within it by none other than the Peacock, the pride of the Indian nation. It had ensured that we remain enthralled by its beauty. The road from our hotel to the park crossed an embankment over the river Ganges. The cemented path bordering this embankment was adorned with peacocks strutting around with their mesmerizing plumes held up for our eyes. We were breathless with admiration. Even within the park the Peacocks, the roller birds and the kingfishers left us speechless with their display of the colour blue in so many assorted shades. How many more shades does Nature have in her palette? We wondered.

Our Pot of Gold

Finally we got the opportunity to dispel our past disappointment. We sighted the elephants. First there was the bull, wolfing down the leaves of the Rohini and Khair trees abundantly growing in the area. Then we noticed the rest of the herd slowly walking down the hills to the river below, their buff coloured bodies brushing against each as they frequently snaked up their trunks to smell the air to be aware of possible danger. I was sure they could smell us but they knew we were too far away to do them any harm. They rumbled their thoughts to each other as they lapped up the water from the rapidly flowing mountain river in happy communion. 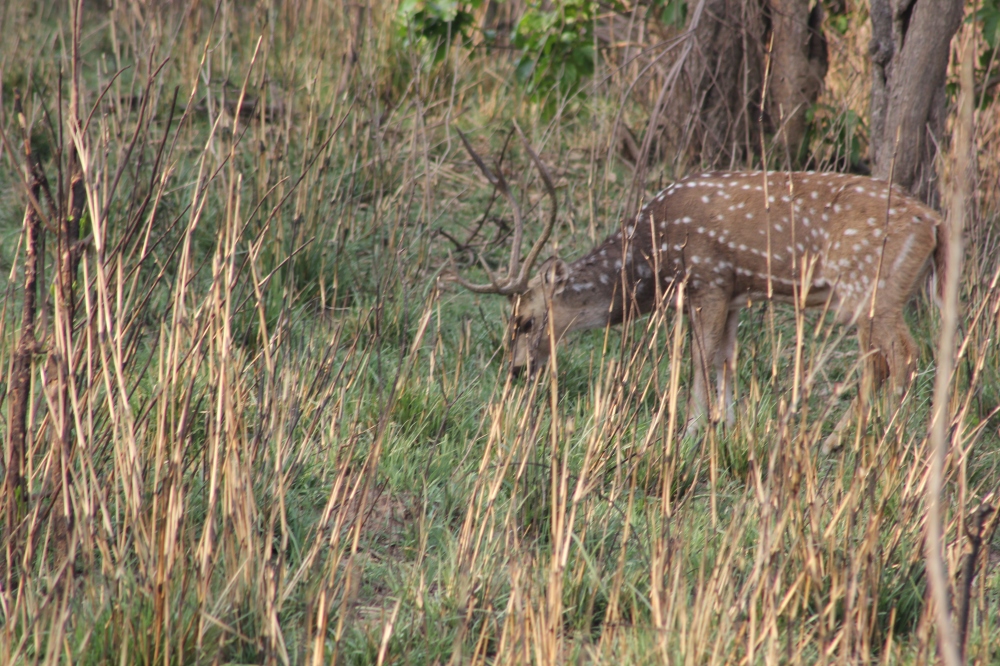 As we looked towards the left of the herd we noticed a doe and her fawn standing close by. The baby nuzzled against its mother, its coat of beize and white sparkling with a freshness that is the privilege of youth. The peace that prevailed in that one moment made us speechless. Such bliss was unimaginable in the world of humans. I did not bother to take out my camera as I wished to etch this happy picture forever in my mind from where it would never be wiped out.

As the sun decided to call it a day, we prepared to leave. The park assumed a new look with the fading daylight. The green lost its lustre and the dust rose in greater gusts to shock us with its fierceness. We were almost blinded and coughed up dusty tales of our experiences to each other on the way back. We thought the day had given us all it could when our jeep stopped. The horrible stench emanating from an area nearby caused us to press our hands to our nostrils to block out the the assault on our olfactory senses. We looked up at the sky to find our jeep being circled by the de facto scavengers of the Jungles – the Vultures. The birds with hooked beaks, their piercing eyes and curved neck stemming out from their blackish brown plumes were a vision to behold. They settled down on a nearby tree waiting to start on their daily tasks – that of scavenging the remains of the dead. There had been a kill it seems and the carcass was lying waiting to be cleaned. The jungle has its own ways to clean up its acts. We were not required there to impede its progress. We drove off, leaving the vultures to finish their tasks unhindered.

The sky above us assumed a montage of dull red and orange hues that seemed to play a bleak note of farewell. The red beaked parakeets were twittering their way home flaunting their bright green wings against a dusky sky. The gates loomed near. Very soon we emerged out of the park caked in a healthy coating of dust. As the monochromatic shades of our regular world gradually began to take shape in our consciousness, we became aware of its stark difference from the one we had just left behind. However, we were thankful that we had liberally coloured our minds in happy hues that would keep us going for a long time to come.

In case you need to know where we have been, take a look at these details. The Rajaji National Park is situated in the state of Uttarakhand. It is situated along the hills and foothills of Shiwalik ranges in the Himalayan foothills. It currently comprises the Chilla, Motichur and Rajaji ranges which forms the complete boundary of the Rajaji National Park. It is spread over the areas Pauri Garwal, Dehradun and Saharanpur districts of Uttarakhand.