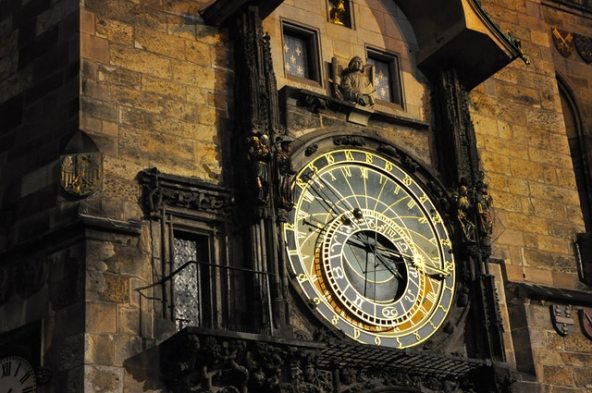 It would simply go on all day grating on Gandharv’s senses! Its incessant rusty twang was fast accelerating from an irritation to becoming intolerable. Sometimes he wished he could simply wrench it out of the wall where it was lodged since forever and throw it out. The Clock was a headache. Moreover, it gave the wrong time and would groan out a gong at the wrong hour of the day. Gandharv however, was not invested with the power to announce its banishment from the house.

The huge wall clock adorning the central landing space of ‘Sen Mansions’, ever since Gandharv was born and even before that, belonged to Gandharv’s uncle, the Retd Maj. Ghanashyam Sen. It was a gift from his senior in the Territorial Army regiment on his retirement. Ghanashyam, or Major. Sen, as he was better known among his colleagues, family, friends and neighbours, was a tall strapping handsome man in his hey days. He was famous for his disciplined and righteous nature to call a spade a spade. Major. Sen cherished his days in the army and was extremely emotional and fiercely protective about all his memories related to those days. The Clock was one of his most precious memories as it was a gift from his most favourite seniors, Brig.Kharbanda.

“This is for all the good times, Major,” the Brigadier had said heartily, while giving it to him and Major. Sen could hardly bear to part with the good times that had become an indelible part of his existence.

Gandharv, who had inherited a lot from his uncle in terms of a strong will and a fiercely independent spirit, often came into conflict with the Major over a lot of issues. The Clock was one of their most frequently debated topics.

One night during dinner after a long argument over moving the clock out of the house, Gandharv had exploded. “Come on, Kakum!” he had said with exasperation. “Don’t you think it’s high time we get rid of this old boy? He has long expired and you insist on pulling along a corpse with you.”

“Dead?” the Major looked at Gandharv with his eyes popping out of his half bald head “Did you say dead? Do you even know what you are saying? That Clock is my heartbeat. It will keep on beating till I am alive. If you want to get rid of it, you will have to do it over my dead body!” he gave his parting shot as he waddled into his bedroom leaving Gandharv fuming at the dinner table.

The ‘Sen Mansion’ was one of the first buildings to have come up in the quaint south Kolkata neighbourhood. It was built by Major Sen’s father, the late Dr Sadanand Sen, after the Sen family moved from Bangladesh or East Pakistan to West Bengal during the time of partition. The family was a huge bustling menagerie of shouting men, howling children and laughing women. It was a happy and busy household who were always fighting, laughing and loving each other. They managed to keep the neighbourhood entertained with their highly theatrical squabbles. However, no matter what, each one of Major Sen’s six brothers and their children were fiercely protective of each other even after they grew up and away from each other. On the whole, the Sens of ‘Sen Mansion’ made one big happy family.

Over the years, the family got smaller and smaller. The girls got married; boys took up jobs overseas or in other cities and the older generation left for happier lands. The house had gradually grown into a silent shadow of its illustrious past.

Gandharv was Major Sen’s elder brother’s son. Both were very similar in nature. All through his childhood, Gandharv shared a special relationship with the Major. The Major had reciprocated the feelings and always displayed a special favouritism towards Gandharv in comparison to all the other children including his own daughter. Gandharv too relished this special treatment as that meant getting to listen to his favourite plays on the radio in the afternoons. Despite his tough appearance, the Major, deep down, was a very emotional person. Therefore, he too revelled in the high-strung emotional dramas that played on the radio. Both uncle and nephew could often be seen shedding copious tears in front of the radio moved by Hanuman’s ardent speeches or Sita’s lovelorn soliloquies on Sunday afternoons.

Childhood, however, is a beautiful moment that is spent too soon. As the years passed, Gandharv grew up and moved on in his own life. He translated his fascination with theatre and all creative arts into a profession of his choice and joined a leading Media agency as a creative and brand strategist. A fast life, friends, media gatherings, women and a whole lot of far more exciting things occupied his life leaving little space for the old and the forgotten. Major Sen too grew old, cranky and more stubborn.

Soon as one by one members of the Sen Family left, the ‘Sen Mansion’ became a lonely and dark place. It was then that the incessant chiming of the big grandfather clock began to grind into Gandharv’s senses.

The clock had a big circular head with its dials in Roman numerals standing out in bold fonts. The dial was covered with a glass cover that had become misty with age. The cover could be opened and closed with the help of a clasp on its side. Its pendulum despite being tarnished with rust continued to swing in a perpetual rhythm. It reminded Gandharv of the mad beggar down the lane who shouted out throatily every hour of the day without knowing what he was saying. The body of the clock was encased in a wooden box of good Burma teak that, despite its age, exuded a quality that was no longer available in the current market. In the centre of the box there was a place for a key to be inserted to wind up the clock.

Every morning, Major.Sen would haul himself up the staircase to wind it up. He would carefully take out the long slender key from its case and turn it in the key hole. Lovingly caress the clock and wipe the glass cover with a soft cloth that he kept especially for it. Gandharv would watch this daily ritual with a sarcastic look and shake his head in disbelief.

Even a few years back he had taken the clock to a watch repair shop until they had refused to take it in anymore. “This is an antique piece now, Mr. Sen” the mechanic had said “We do not have the expertise to repair this kind of machinery anymore.”

When Gandharv had related this message to Major Sen, the old man had thumped his back strongly with a sad look in his eyes but when he spoke his voice was filled with pride. “Gandy my boy” he had said, “always remember ‘Old is Gold’.”

Gandharv never liked it when he anglicised his name. “Look Kakum, I think we should get rid of this now. It’s become too old to serve any purpose. So why bother maintaining it?”

Frustrated Gandharv had given up the battle. However, no matter how much he opposed its presence, deep in his heart Gandharv also had a reason to be thankful to the clock. At the corner of the staircase that led up to where it hung, Gandharv had converted a small study into his room. He kept up late quite often reading or planning the next day’s work, the chime of the clock made him feel as if life was throbbing in the house like before and helped him forget the bleak emptiness that surrounded their once bustling hearth.

One Saturday morning Gandharv had to leave for work urgently. He was surprised to find that Kakum had not come up for his daily ritual to wind the clock. Not giving it too much thought he finished his breakfast and peeped into the Major’s room to bid him his customary farewell. He was surprised to see the room dark and the Major still in bed. Surprised, he asked “What’s wrong Kakum? Are you not feeling well?”

“Why? Just because I didn’t get up one day, I have to be sick is it? Now you will rush me to the hospital and create a fuss for nothing,” snapped the Major.

“I was just asking. You need not get so angry. Anyway, I am leaving for work.” said Gandharv angry that he even bothered to ask.

“Are you in a hurry?” said the Major

“I need to wind up the clock” said the Major in a halting voice.

“Oh Please Kakum! Don’t tell me I have to wind up your miserable clock now. I will do it when I am back. As if it will make any difference” he muttered the last few words to himself as he left the house in a huff. This clock was really eating into his uncle’s mind. Gandharv decided he had to do something about it. As he turned the ignition key in his car, Gandharv hoped that thought was the only reason for creating the feeling of uneasiness that kept gnawing at his heart.

The day was a busy one for Gandharv. Client meetings, estimations, shoot schedules, spot finalization, meeting with vendors, pushed Kakum and his clock to the back of his mind and even probably out of it. It was quite late when he checked his phone to find 31 missed calls from Sudha Aunty his next door neighbour. By the time he tried to call, he found his battery was critically low. He was anyway leaving and thought he would talk to her directly. In any case, Sudha Aunty was the neighbourhood gossip and would often call him to talk of things which were hardly of any concern. However, as he pushed the car into first gear and pressed the accelerator Gandharv could not explain the morning’s uneasy feeling that had returned to close their cold fingers over his heart.

The lane that led to his house was usually dark by the time he came back every day. However, today was different. He found many houses had their lights on. As he parked his car in their garage, Gandharv wondered whether there was a cricket match today that he had missed. As he came out of the garage, Sudha Aunty almost pounced on him, “Gandharv! Where have you been all day? I have been trying to call you so many times?”

“What’s wrong Aunty?” asked Gandharv as he noticed many others from their neighbourhood had also gathered at their house.

At first Gandharv could not make sense of what she was saying. When he did, he made a dash for the Major’s room. He found him lying down just as he had seen him in the morning. His bedside drawer was open and the key box where he kept the keys for his clock lay on top of the table. It seemed the Major was trying to take out the keys to wind up the clock. For him this was the most important duty in his whole day. The one thing he had ever asked Gandharv to do for him, his last wish. Naive and insensitive Gandharv, like always, had refused.

There was something else which disturbed Gandharv. Despite his neighbours murmuring condolences around him, he could feel there was an eerie silence pervading the house. There was something that was making its presence pronounced with its absence.

As Gandharv walked out of the room and stood in front of the staircase, he realised what had happened. The Clock, he found, had stopped ticking. It had finally silenced its musty chime, because Gandharv knew it had lost its heartbeat.